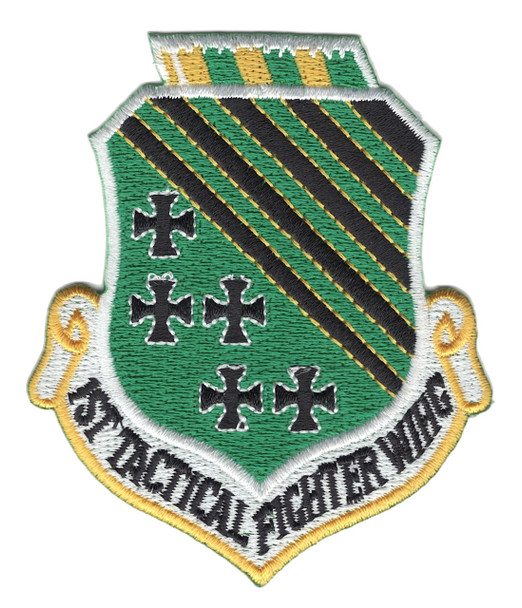 Sale Price: $8.55
Normally
— You save
Frequently bought together:

U S 1ST TACTICAL FIGHTER WING As the host unit at Langley Base, Va., the 1st Fighter Wing operates and maintains one of the largest fighter bases in the Air Force's Air Combat Command. ACC's mission is to provide the world's best combat air forces delivering rapid, decisive air power anytime, anywhere. The wing's primary mission is to work as a team to be ready to deploy, deter and win, setting the standard in air supremacy. To accomplish its mission, the men and women of the 1st Fighter Wing are broken out into four groups: the 1st Operations Group, the 1st Logistics Group, the 1st Support Group and the 1st Medical Group. These groups are further broken down into 21 squadrons, including three F-15 fighter squadrons with 54 primary assigned F-15Cs: the 27th FS, known as the "Fighting' Eagles"; the 71st FS, known as the "Ironmen" and the 94th FS, also known as the "Hat-in-the-Ring Gang". To accomplish its dynamic and challenging mission, the wing flies the Air Force's air superiority fighter, the F-15 Eagle, which entered operational service at Langley in January 1976. Fully operational in December 1976, the wing is now equipped with 66 assigned F-15s. The 1st FW has a long and distinguished history. Known as the 1st Pursuit Organization and Training Center in World War I, the unit recorded the first confirmed aerial victory of the war April 14, 1918, as Lt. Douglas Campbell of the 94th FS downed a German Pfalz D-3. The 1st Pursuit Group ended the war with 202 confirmed kills. During World War II the 1st Fighter Wing again excelled, winning three Distinguished Unit Citations for outstanding performance of duty. Redesignated as the 1st Fighter Group, the unit introduced the P-38 Lightning into the war, flying more than 20,000 sorties on 1,405 combat missions, and scoring more than 400 aerial kills. The wing continued its distinguished history by becoming the first operational F-15 wing in the in 1976. In its long tradition of "firsts," the 1st Fighter Wing rapidly deployed Aug. 7, 1990, in support of Operation Desert Shield, being the first U.S. unit to establish air superiority over the skies of Saudi Arabia. During Operation Desert Shield and Desert Storm, the wing's two deployed squadrons flew more than 6,200 sorties for a total of nearly 25,000 air hours. In 1999, the wing's 74th Air Control Squadron participated in Operation Allied Force when it deployed to Hungary to monitor and control air traffic. More recently the 1st First Fighter has supported both Operation Southern Watch in Southwest Asia and Operation Northern Watch in Turkey. During a normal day's flying operation at Langley, the wing will launch about 90 fighter training missions in air-to-air combat, aerial gunnery and air defense intercepts. Most flying operations are conducted in dedicated air space over the Atlantic Ocean off the Virginia and North Carolina coasts. The wing has participated in a wide variety of exercises and deployments across the United States, in Canada and overseas to hone its combat skills. The wing's many deployments include the United Kingdom, France, Germany and Denmark in Europe; Jordan, Egypt and Saudi Arabia in Southwest Asia; Turkey and Iceland. The 1st Fighter Wing was restructured from the 1st Tactical Fighter Wing Oct. 1, 1991, as part of the Air Force's reorganization of its aircraft assets. The 1st Fighter Wing was: The first U.S. group-level unit to enter air combat. The first U.S. unit to destroy enemy aircraft in World War 1. The parent unit of the first winner of the Medal of Honor for aerial combat. The parent unit of the two highest scoring U.S. aces in World War 1. The first fighter unit to deploy en masse over the North Atlantic. The first U.S. unit to destroy a German aircraft in World War ll. The first U.S. jet fighter unit. The first operational unit to fly the F-15. The first fighter unit to deploy in support of Operation Desert Shield. In its 2005 BRAC Recommendations, DoD recommended to realign Elmendorf Base. The 3rd Wing at Elmendorf Base would distribute 24 of 42 assigned F-15C/D aircraft to the 1st Fighter Wing, Langley Base, VA. This recommendation would also distribute a portion of the F-15C/Ds at Elmendorf Base (36-fighter) to Langley Base (2-fighter). Elmendorf would retain one squadron (18 aircraft) for air sovereignty missions and would distribute the remaining 24 F-15Cs to Langley Base. DoD also recommended to realign Richmond IAP AGS, VA. As a result, the 192nd Fighter Wing's (from Richmond) manpower would associate with the 1st Fighter Wing.
View AllClose

Sale Price: $10.10
Normally
The United States Air Force 474th Tactical Fighter Wing was engaged in combat operations during the Korean and Vietnam Wars during its lifetime.
13022