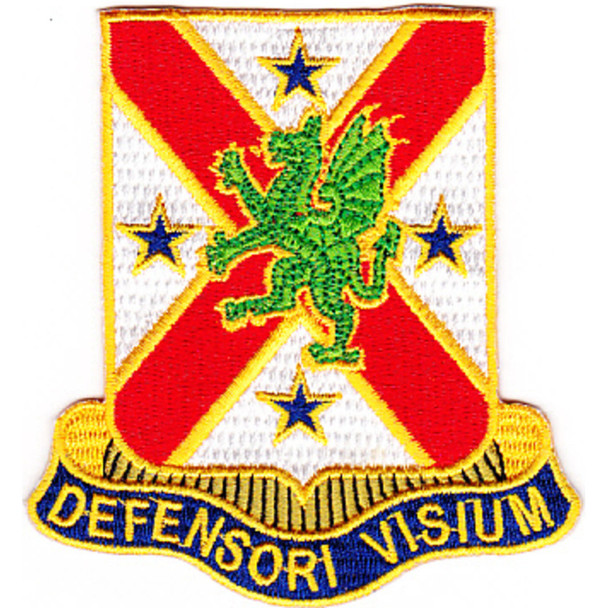 Sale Price: $10.05
Normally
— You save
Frequently bought together:

US ARMY 278th Chemical Battalion Patch "Protectors of the Force" Distinctive Unit Insignia. Description: A 3 x 3.5 inch patch consisting of a shield blazoned: Argent, a saltire Gules fimbriated Or cantoned by four mullets Azure, overall a dragon segreant Vert, armed and langued of the third. Attached below the shield a cobalt blue scroll inscribed "DEFENSORI VISIUM" in Gold. Symbolism: Cobalt blue and golden yellow are the colors traditionally used by Chemical units. The golden yellow fimbriation on the saltire suggests the courageous spirit of the personnel in the battalion. The dragon, a legendary creature, symbolizes vigilance and power, emphasizing the fire and destruction of chemical warfare. The red diagonal cross or the Saint Andrew cross is adapted from the flag of Alabama and represents the state where the battalion is located. The blue stars highlight the battalion's four major European campaigns during World War II. Scarlet signifies courage and sacrifice. Background: The distinctive unit insignia was approved on 28 March 2003.
View AllClose

Sale Price: $9.80
Normally
The Chemical Corps is a branch of the US Army tasked with defending our country against Chemical, Biological, Radiological, and Nuclear (CBRN) weapons. The corps was founded as the Chemical Warfare...
2518