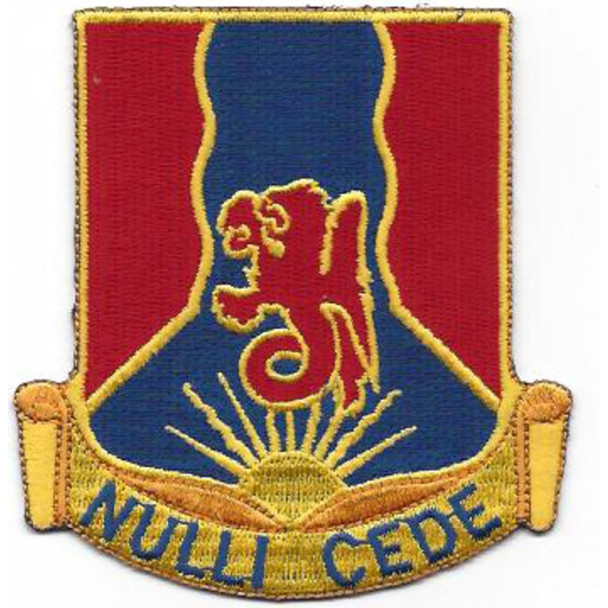 Your Cost: $8.59
Retail:
— You save
Frequently bought together:

United States ARMY 249th Field Artillary Regiment Military Patch NULLI CEDE McGROGAN's 249th REGIMENT PATCH Distinctive Unit Insignia. Description: A 3 x 3.5 inch patch consisting of a shield blazoned: Per chevron Gules and Azure, from partition line to chief a pale wavy of the second fimbriated Or, issuant from base a setting sun of the last, at nombril point a sea-griffin of the first fringed of the fourth. Attached below the shield a Gold scroll inscribed "NULLI CEDE" in Blue letters. Symbolism: The service of the former organization, the 249th Artillery, is indicated by the red shield for Artillery. The blue portion represents the mouth of the Columbia River, the station of the 249th Coast Artillery. The setting sun is taken from the Oregon State seal, while the sea-griffin is the mythical guardian of treasure on land and sea. Background: The distinctive unit insignia was originally approved for the 249th Coast Artillery on 16 February 1928. It was redesignated for the 249th Coast Artillery Battalion on 4 December 1944. The insignia was redesignated for the 722d Antiaircraft Artillery Automatic Weapons Battalion on 27 November 1951. It was redesignated on 7 June 1960 for the 249th Artillery. The insignia was amended to correct the motto on 14 June 1968. The insignia was redesignated with description and symbolism revised for the 249th Regiment on 4 May 1998. It was amended to correct the description on 21 September 2001.
View AllClose

Your Cost: $7.74
Retail:
The crossed cannons Patch for Artillery have been in continuous use since 1834, when they were placed on regimental colors, knapsacks, and as part of the cap insignia for Artillery officers.
2772