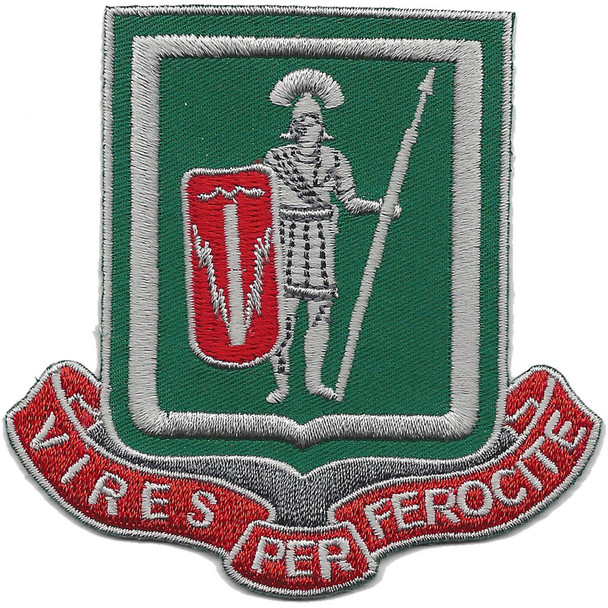 Your Cost: $9.09
Retail:
— You save
Frequently bought together:

Special Troops Battalion, 1 Brigade, 1 Cavalry Division Distinctive Unit Insignia. Description: A Silver color metal and enamel device 1 1/8 inches (2.86 cm) in width, consisting of a shield blazoned: Teal, a centurion in armor, on his head a helmet with a plume of feathers Silver Gray, holding in dexter hand a shield Gules fimbriated of the second thereon a pale couped between in chief an arrow wavy point to sinister and in base two lightning flashes chevronwise reversed all of the last, in sinister a spear, all within an orle Silver Gray. Attached below a Red scroll inscribed with "VIRES PER FEROCITE" in Silver. Symbolism: Teal is the color associated with Branch Immaterial. The centurion was a professional officer of the ancient Roman that commanded 100 or fewer men (leader of a hundred). The image symbolizes the battalion's label as the "Centurion" unit. The centurion holds a shield prepared for combat, displaying the three components that comprise the battalion; the color red denotes the engineer mission, the lightning flashes suggest the signal and intelligence missions. The pale signifies strength; it is cropped to allude to the numerical designation of the brigade "1." The wavy arrow represents the battalion's readiness to deploy to any locality to perform its mission. The orle refers to the continuing courage of the service members attached to the unit. Background: The distinctive unit insignia was approved on 25 October 2005.
View AllClose