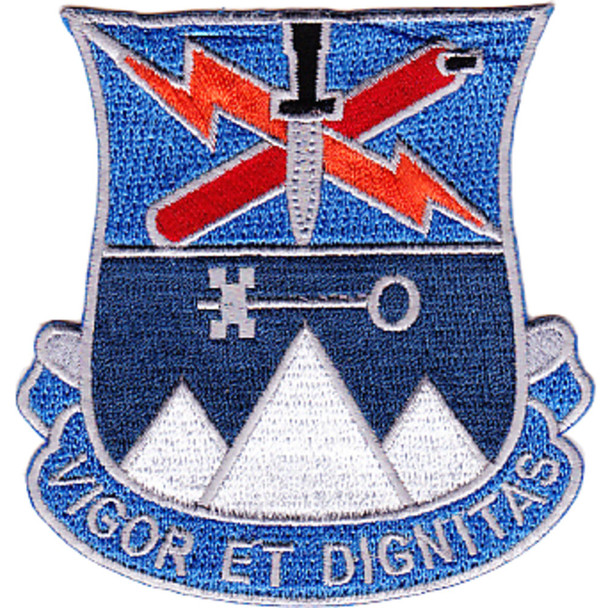 Sale Price: $9.70
Normally
— You save
Frequently bought together:

Special Troops Battalion, 2 Brigade, 10 Mountain Division Patch Distinctive Unit Insignia. Description: A Silver color metal and enamel device 1 3/16 inches (3.02 cm) in height consisting of a shield blazoned: Per fess Celeste and Azure, in chief a lightning bolt Tenne and a stick of dynamite fuse upwards Proper, in saltire, surmounted by a bayonet palewise point to base Proper, in base above a stylized mountain range issuing from base Argent, a skeleton key Silver Gray in nombril point fesswise wards dexter. Attached below the shield is a Blue scroll inscribed "VIGOR ET DIGNITAS" in Silver letters. Symbolism: The three snow covered mountains symbolize the unit's early designation as a Mountain Unit, and its association with Colorado, and represents the three primary units the battalion was formed from: Engineer, Military Intelligence and Signal. The lightning bolt symbolizes communications mission and the lineage to the Signal Battalion that the Special Troops Battalion, 2d Brigade was formed from. The stick of dynamite symbolizes the mobility and counter-mobility provided by the engineer company and combined with the lightning bolt represents the Roman numeral X, representative of the 10th Mountain Division and expresses the shock and explosive power of the battalion. The bayonet represents the associations to the 2d, the Commando Brigade and the campaigns of the Division in the Italian Alps. The key represents knowledge provided by the Military Intelligence Company in the battalion. The primary mission of the Brigade is in support of the Infantry and is represented by the light blue in the chief. The teal in the bottom half is the branch immaterial color. Background: The distinctive unit insignia was approved on 7 February 2005.
View AllClose