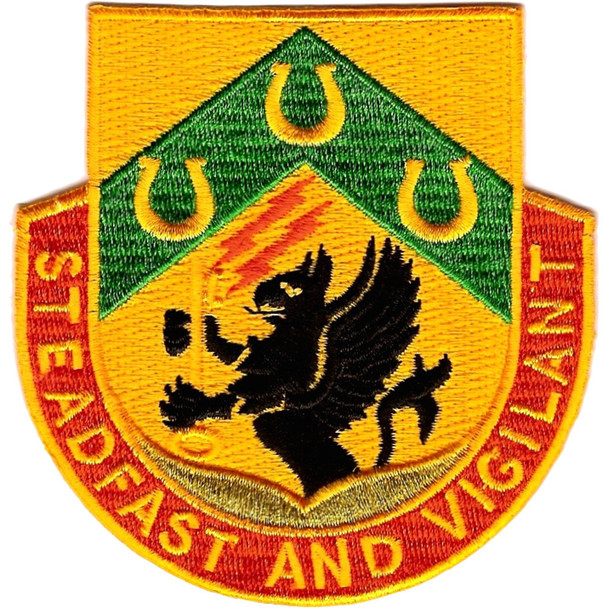 Sale Price: $9.95
Normally
— You save
Frequently bought together:

Special Troops Battalion, 3 Brigade, 1 Cavalry Division Distinctive Unit Insignia. Description: A Gold color metal and enamel device 1 1/8 inches (2.86 cm) in height overall blazoned as follows: Or, on a chevron enhanced Vert, three horseshoes reversed of the first; issuant from base a demi-griffin segreant Sable, langued, eyed and armed Gules supporting between the claws a key in pale ward up Or emitting two lightning flashes bend sinisterwise of the fourth. Attached below a Red motto scroll inscribed "STEADFAST AND VIGILANT" in Gold. Symbolism: The chevron is the heraldic symbol for support. The three horseshoes denote the brigade's numeric designation. The combination of the chevron and horseshoes reflect the increased support capability to the brigade. The griffin, a mythical creature, part eagle and part lion, represents the unit's support, reconnaissance and security abilities that comprise the unit. The key signifies security and intelligence identified with the Intelligence capabilities of the battalion. The lightning flashes represent the electronic transmission that is characteristic of the Signal element. Background: The distinctive unit insignia was approved on 11 August 2005.
View AllClose

Sale Price: $12.25
Normally
Domain of the Golden Dragon - Unofficially awarded to those that cross the International Date Line. Enter the dragon's empire, "Into the silent mysteries of the far east." See our blog on the Domain...
14012