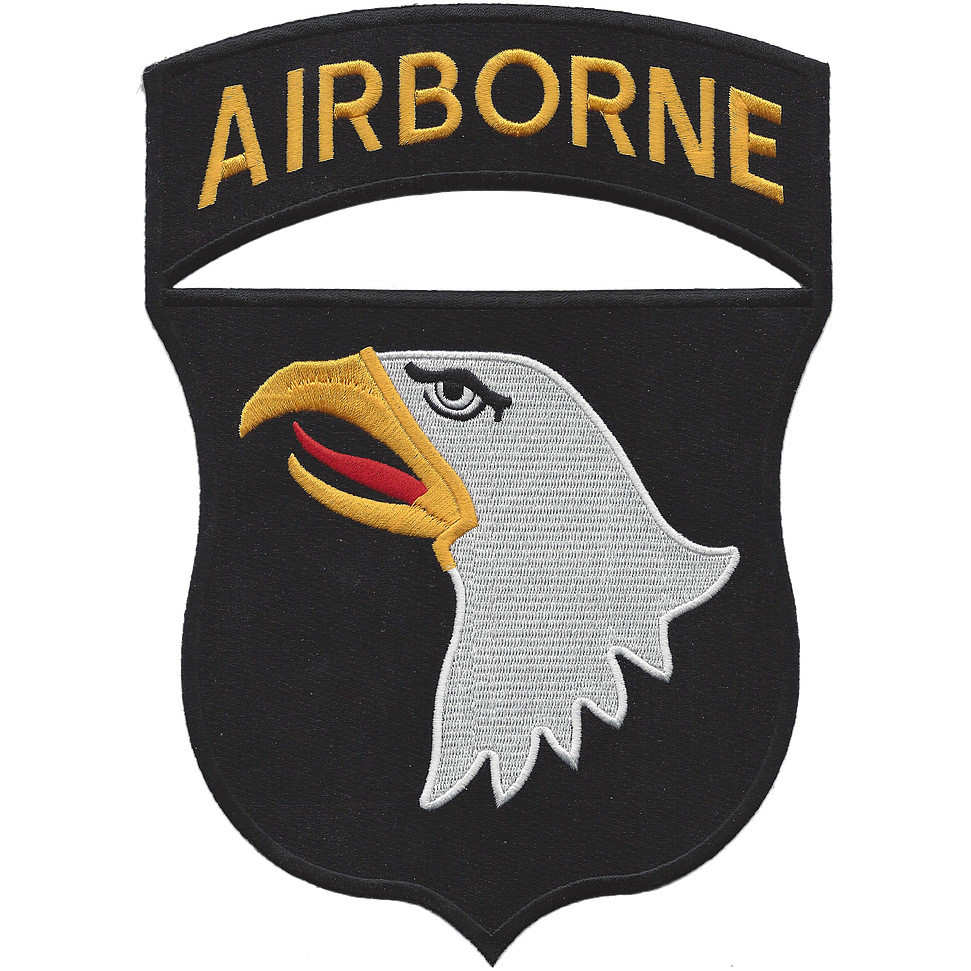 The 101st Airborne Division has been active since August the 16th 1942. Initiated in Camp Claiborne Louisiana, its first commander Major General William C Lee stated that while the division had no history it had "A Rendezvous with Destiny." Well these words rang true. The 101st Airborne Division has supported many operations and been involved in numerous battles and campaigns since that statement.

During World War II as part of Operation Overlord, code name the Battle of Normandy, the 101st Airborne Division were of the first Allied Soldiers to set foot onto occupied France during the invasion of German-occupied western Europe. Commenced on June 6th 1944, well known as D-Day, the 101st was charged with clearing the way for the 4th Infantry Division's landing on the Utah Beach, which eventually linked the Utah and Omaha beachheads and liberated the city of Carentan.

Though unsuccessful during Operation Market Garden the Division was strategically made use of to secure bridges and allow a rapid advance by armored units into Northern Germany. Still the Division did not return to France until after fighting heavy odds for 72 days to hold a narrow 16 mile corridor through enemy held territory.

In mid December 1944 the 101 Airborne Division was unexpectedly recalled to the front in order to counteract a massive German offensive through the Ardennes Forest. The goal was to defend the critical road junction at Bastogne, Belgium however a surprise attack caught our Allied forces off guard and, in terms of casualties, became the costliest battle for the US during World War II. This German offensive campaign, which launched through the dense forest and made use of severely overcast weather conditions in order to minimize our 101st aerial reconnaissance became well known as the "Battle of the Bulge".

As part of all three of these major battles, D-Day, Operation Market Garden, and Battle of the Bulge, specifically this 506th Infantry patch has gained much notoriety due to the HBO series "Band of Brothers." This series still shows regularly on different networks around the world following the stories of "Easy Company" part of the 506th Parachute Infantry Regiment of the 101st Airborne Division and creating a lot of popularity for the 506th patch. 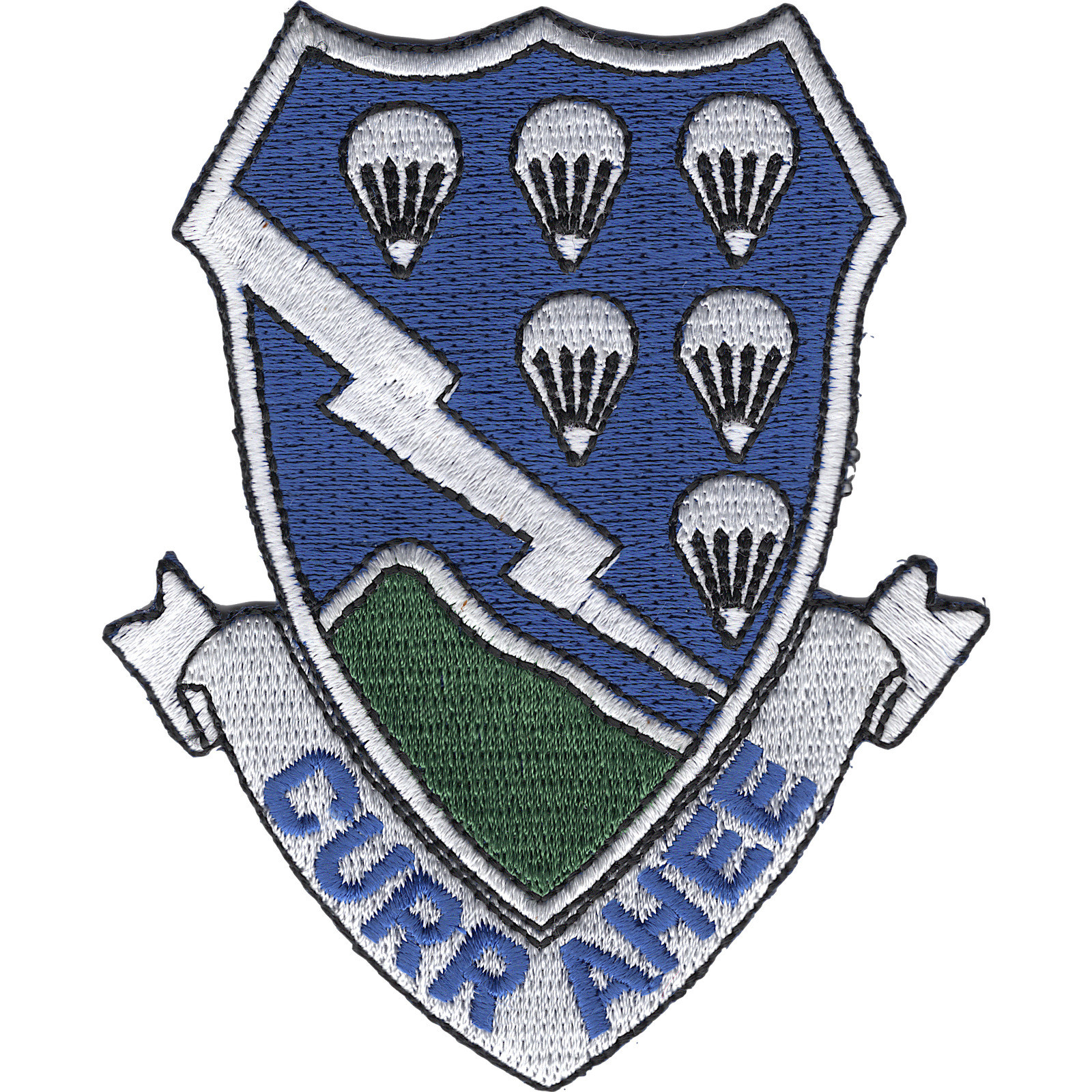 In the spring of 1945, after attacking German forces through the Ruhr valley into Bavaria, the 101st Airborne Division's Screaming Eagles liberated the Landsberg concentration camp and Hitler's mountaintop retreat in Bertchtesgaden. The Division would then be relegated to occupation duties in Germany, Austria, and France before being inactivated in November 1945.

On September 21st 1956 at Fort Campbell Kentucky ceremonies were held for the reactivation of the 101 Airborne Division. Later in 1957 elements of the Division made history taking part in Operation ARKANSAS, and were ordered by president Eisenhower to Little Rock Arkansas to intervene against Governor Orval Faubus who was preventing African American students from entering their racially segregated school. There they were part of a team to escort the first nine Africa-American students, known as the "Little Rock Nine", to classes they attended in Little Rock High School.

The 101st Airborne Division and the Vietnam War

In mid 1968 the Army and the 101st Airborne Division was going through a time of change. This change re-designated the Division as an Airmobile Division following the deployment of troops primarily from airplanes to helicopters as the way of entering battle.May 1969 in the Vietnam War, the Airborne troops went in by chopper and moved up the heavily fortified Hill of 937, or as the American soldiers who fought there dubbed it "Hamburger Hill", during Operation Apache Snow. As part of a campaign this operation was intended to neutralize the A Shau an infiltration to rout and destroy North Vietnam Army Base Areas in the Shau Valley. Through a direct assault effort the Airborne troops eventually took the hill. Seen here is the A Shau Valley Airborne patch. 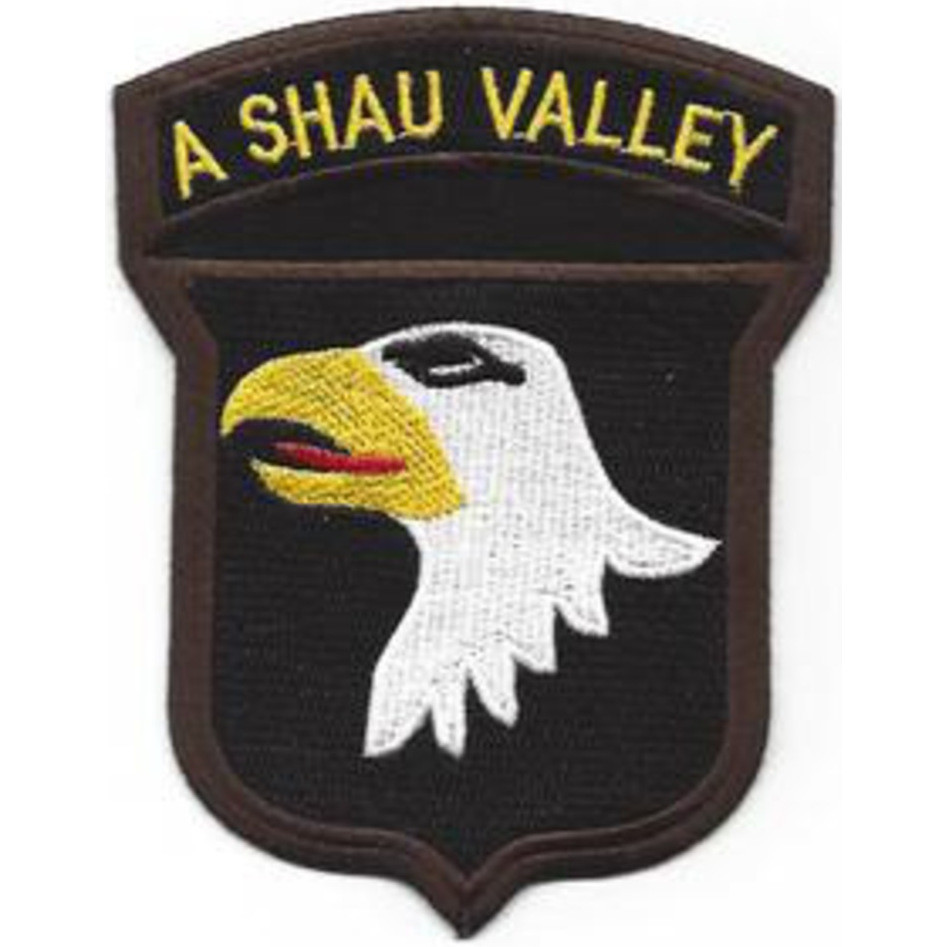 On October 4th, 1974 the Division was again re-designated as the 101st Airborne Division Air Assault.Later in 1982 the Division would become members of the Multinational Force & Observers as a result of the Camp David Accords between Egypt and Israel. In 1985 on December 12th tragedy struck when the plane flying 248 members home, from the Sinai Peninsula, in time for Christmas crashed near Gander, Newfoundland.

In the 1990's the 101st Airborne Division supported Operation Desert Shield and Desert Storm. During this time the Division conducted the longest and largest air assault operations to date during the Liberation of Kuwait. The Screaming Eagles had many operations during the 1990's world-wide in efforts of support and stability. Seen here is the 101st Airborne Division Operation Desert Storm patch. 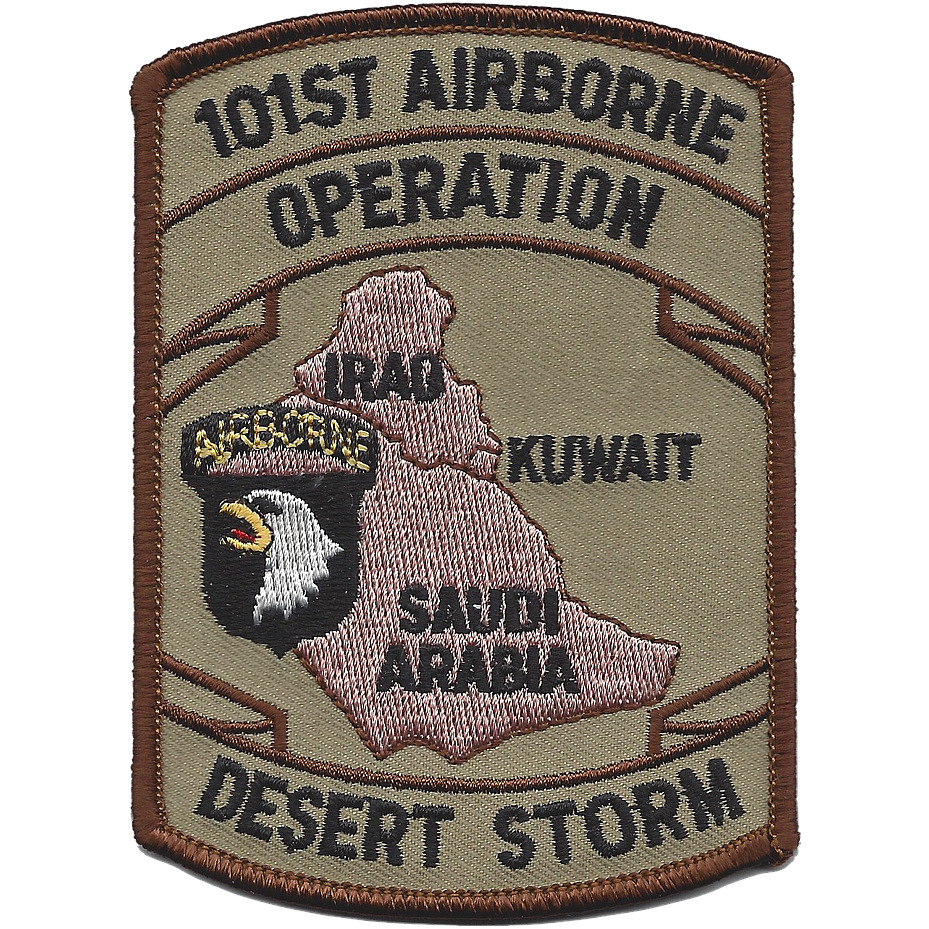 The 101st Airborne Division and The War On Terror

In the wake of 911, the 101 Airborne Division (Air Assault) was the first conventional unit to deploy in support of the American War on Terrorism and Operation Enduring Freedom. In 2003 anticipation of combat operations against Saddam the Division was deployed to Kuwait as part of Operation Iraqi Freedom. Due to the Division's flexibility it endured intense combat in urban areas during air and land movement through hostile territory. The longest assault in history was conducted by the Division when it was ordered to north Iraq and quickly took responsibility for Iraqâ€™s second largest city, Mosul, and the four surrounding provinces. Following this the Division started the reconstruction of civilian basic services and infrastructure. During this time the Screaming Eagles helped with the reconstruction, captured insurgents, and killed Uday and Qusay Hussein. Operation Iraqi Freedom is represented here on this U.S Army patch. 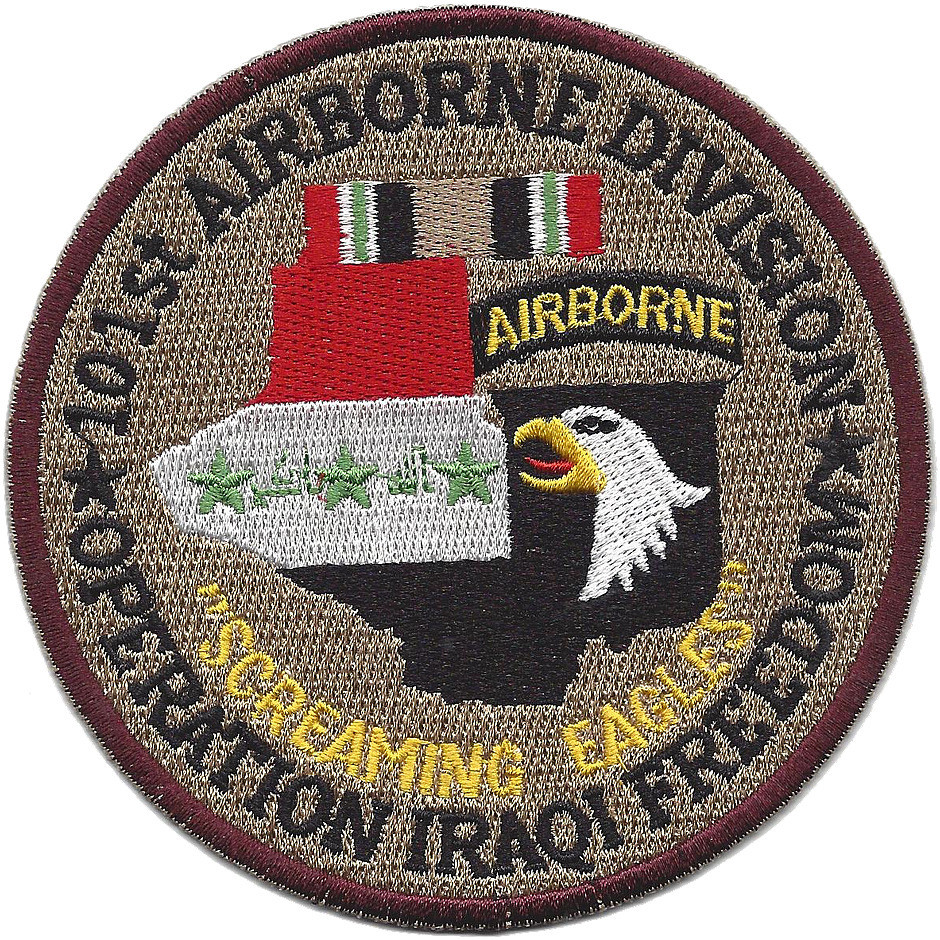 In November of 2005 the 101st Combat Aviation Brigade as well as the 1st and 3rd Brigade Combat teams deployed to Iraq for a second time. The Division assumed responsibility for the northern half of Iraq as Task Force Band of Brothers. The Screaming Eagles, working with the other Army divisions drastically improved security by developing Iraqi Force units. By 2007 the majority of the DIvision was deployed again and working under Multinational Divisions conducting combat operations throughout Iraq.

In Support of Operation Enduring Freedom, the Division Head Quarters and its Special Troops Battalion joined the 4th Brigade Combat Team and the 101st Sustainment Brigade in Afghanistan March 2008. As combined joint task force 101 the Warriors of the 101st trained Afghan national security forces where side by side they pursued insurgent groups wherever they could be found.

Recent objectives of Operation Enduring Freedom have been to help Afghanistan provide security to its people and to do so the Army for the first time called on the entire 101st Airborne Air Assault. OnMarch 14, 2013 inBAGRAM, Afghanistan the 101st Airborne Division Air Assault assumed responsibility of the combined joint task force in eastern Afghanistan.

The 101st Airborne Division has had a long standing and pivotal role in our nation's history. The ability to mobilize and infiltrate has set the Division apart amongst our Armed Forces. These patches and insignias are a great way to remember some of those who have fought and some of these battles that have shaped our history.

Know someone in the 101st Airborne Division?