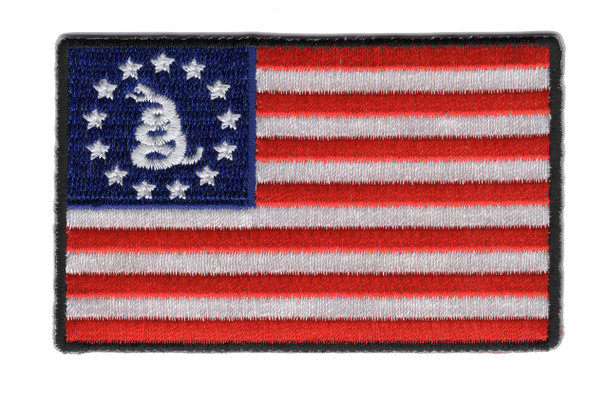 Sale Price: $8.95
Normally
— You save
Frequently bought together:

The Betsy Ross flag is an early design of the United States flag, named after Elizabeth "Betsy" Ross who sewed this flag in the mid-to-late 1770's. Its distinguishing feature is thirteen 5-pointed stars arranged in a circle representing the 13 colonies that fought for their independence during the American Revolutionary War. The rattlesnake represents the Gadsden Flag, which is a flag that includes a rattle snake with the words "Don't Tread On Me". The Gadsden Flag was designed by Christopher Gadsden, both a soldier and a statesman. It says to anyone who would tread on the liberties of free people to think twice. This patch melds the two designs to signify the creation of a new autonomous nation with the ability and will to defend itself.
View AllClose

Sale Price: $10.35
Normally
America Flag or the Stars and Stripes no border Patch - A Borderless replica of American flag with 13 stripes and 50 stars.
8957

Sale Price: $12.30
Normally
USS Ross Fletcher class destroyer combat ship and saw in the Marianas and Palaus Campaigns in the Pacific during WWII. The Ross was disabled on 19 October 1944 when she struck a mine port side...
3748

Sale Price: $7.80
Normally
This patch is in memory of our brothers and sisters that never returned from the Vietnam War. The battlefield cross memorial includes the soldier's boots, rifle, dog tags and helmet. The inverted...
14157

Sale Price: $8.70
Normally
“Give me liberty, or give me death!” On March 23, 1775, Patrick Henry delivered this quote in a speech debating whether to send troops to fight in the Revolutionary War. While addressing the Virginia...
14155