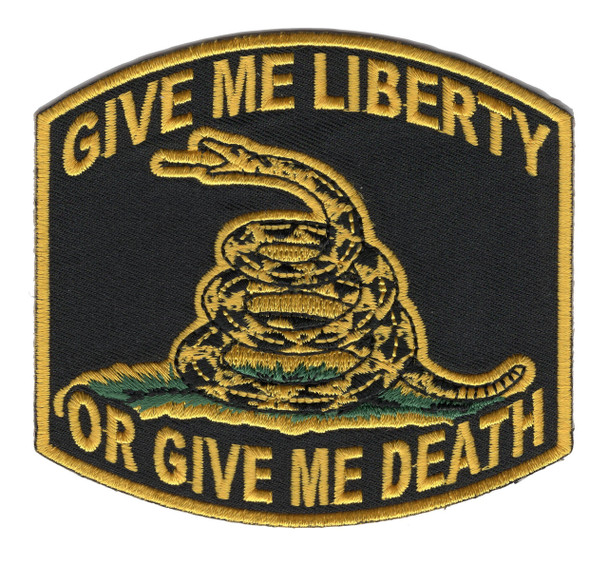 Sale Price: $8.70
Normally
— You save
Frequently bought together:

“Give me liberty, or give me death!” On March 23, 1775, Patrick Henry delivered this quote in a speech debating whether to send troops to fight in the Revolutionary War. While addressing the Virginia Convention at St. John’s Church in Richmond, Virginia, he urged the American colonies to rebel against England. This speech has become one of the most important speeches in American history. “Give me liberty or give me death" means that Patrick Henry would rather die than live without liberty. He believed that the liberty Americans held so dear was under threat, and that they must fight for it. It is said that his speech persuaded the men attending the convention to support the war. The rattlesnake represents the Gadsden Flag, which is a flag that includes a rattle snake with the words “Don’t Tread On Me”. The Gadsden Flag was designed by Christopher Gadsden, both a soldier and a statesman. It says to anyone who would tread on the liberties of free people to think twice. This patch represents all free Americans who will take death over losing their liberty.
View AllClose

Don't Tread On Me Patch

Sale Price: $7.75
Normally
This patch of the Gadsden flag features the famous Marine slogan "Don't Tread On Me" with the coiled rattle snake. This slogan appeared on a flag that was designed by and is named after American...
9583

Will Not Give Up The Fort New York Patch

Sale Price: $7.80
Normally
This patch is in memory of our brothers and sisters that never returned from the Vietnam War. The battlefield cross memorial includes the soldier's boots, rifle, dog tags and helmet. The inverted...
14157