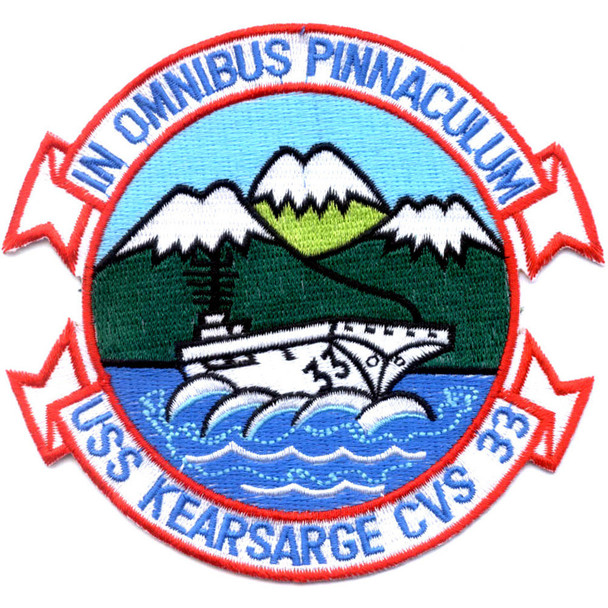 US NAVY SHIPS THE USS KEARSARGE CVS-33 PATCH USS Kearsarge, a 27,100-ton Ticonderoga class aircraft carrier, was built at the New York Navy Yard. She was commissioned in March 1946 and spent her first year of service in training operations in the western Atlantic and Caribbean. During the later 1940s, Kearsarge made two trips to Europe, the first a summer 1947 midshipmen training cruise and the second a mid-1948 deployment to the Mediterranean Sea. In early 1950, the carrier was transferred to the west coast, where she decommissioned in June for extensive modernization work. Recommissioned in February 1952, Kearsarge now had a stronger flight deck, new island and many other changes to her appearance and capabilities. She made a Korean War combat cruise in September 1952 - February 1953, during which time she was reclassified as an attack aircraft carrier and redesignated CVA-33. From mid-1953 to 1958, Kearsarge had regular tours of duty with the Seventh Fleet in the Far East. Her 1955 deployment included supporting the Nationalist Chinese evacuation of the Tachen Islands. The carrier was again modernized in 1956-57, receiving an angled flight deck and enclosed 'hurricane' bow to better equip her to operate high-performance aircraft. Kearsarge was assigned a new role in October 1958, becoming an antisubmarine warfare (ASW) support aircraft carrier, with the new designation CVS-33. In that capacity, she operated ASW fixed-wing airplanes and helicopters to protect the fleet against the threat of hostile underwater attack. Regular Seventh Fleet deployments continued through the late 1950s and the 1960s, including indirect involvement in the Vietnam Conflict. In 1962 and 1963, Kearsarge carried out a new mission, serving as recovery ship for the orbital flights of astronauts Walter Schirra and Gordon Cooper. Made redundant by the general fleet drawdown of the late 1960s and early 1970s, USS Kearsarge was decommissioned in February 1970. Following three years in the Reserve Fleet, she was stricken from the Naval Vessel Register in May 1973 and sold for scrapping in February 1974. - FULLY EMBROIDERED FLAT EDGE WITH CLOTH BACKING
View AllClose

Sale Price: $12.05
Normally
THE USS KEARSARGE LHD-3 The contract to build the Kearsarge was awarded to Ingalls on Nov 20, 1987. Shield and Crest Blue and gold are colors traditionally associated with the and symbolize the sea...
4004