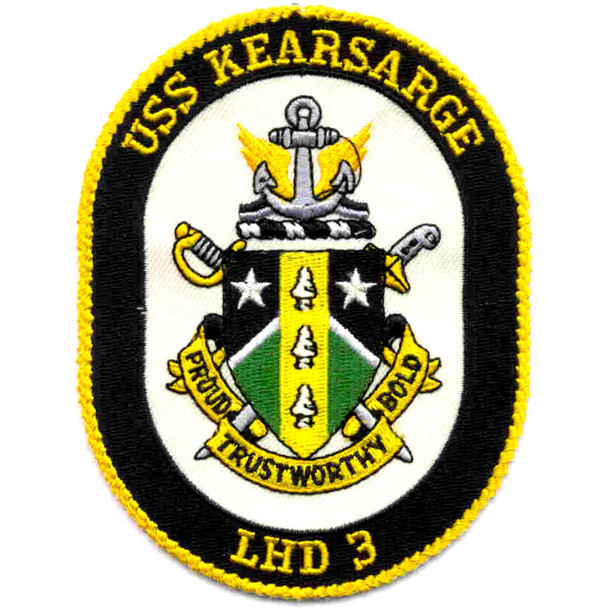 Sale Price: $12.05
Normally
— You save
Frequently bought together:

THE USS KEARSARGE LHD-3 The contract to build the Kearsarge was awarded to Ingalls on Nov 20, 1987. Shield and Crest Blue and gold are colors traditionally associated with the and symbolize the sea and excellence. The green chevron suggests Kearsarge Mountain. A green peaked mountain in New Hampshire. The amphibious nature of the combat operations of the present USS KEARSARGE is represented by green and blue, alluding land and sea. The arrowheads, together with the white chevronel which represents a shore line, allude to assault landings. The stars commemorate the battle stars the third KEARSARGE received for Korean War and Vietnam War service. The wings of the crest symbolize the aviation capabilities of both the present and the third KEARSARGE; they are gold for the honor and achievement. The white anchor recalls the round the world cruise of the second KEARSARGE of the Great White Fleet in 1907 and denotes the naval prowess of the USS KEARSARGEs. The blue and gray wavy bar highlights the Civil War service for the first USS KEARSARGE. Supporters - The swords are crossed to denote cooperation and teamwork as well as the combined combat mission of the U.S. and Marine Corps. Motto - "Proud...Bold...Trustworthy."
View AllClose

Sale Price: $14.25
Normally
US NAVY SHIPS THE USS OKINAWA LPH-3 PATCH - TWILL MERROWED BORDER WITH IRON ON BACKING FOR IRON ON CONVENIENCE - Red, blue and white background with a scene from japan and the aircraft carrier in the...
122