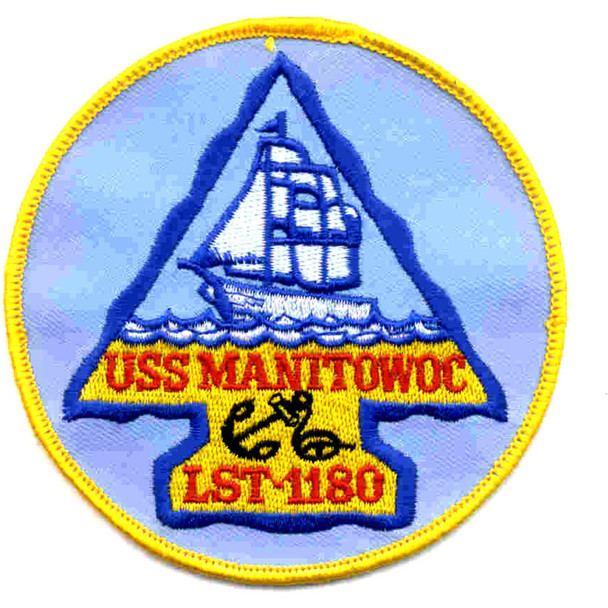 Sale Price: $9.75
Normally
— You save
Frequently bought together:

US NAVY SHIPS THE USS MANITOWOC COUNTY LST-1180 PATCH LST-1180: dp. 8,342; 1. 522'; b. 69'; dr. 23'; s. 20 k.; cpl. 231; a. 4 V; cl. Newport) The second Manitowoc (LST-1180) was laid down as LST-1180 by Philadelphia Naval Shipyard, Philadelphia, Pa., 27 February 1967; named Manitowoc 21 March 1967; launched 4 January 1969; sponsored by Mrs. Gaylord Nelson; and scheduled to -be commissioned in mid-June 1909. Once completed, Manitowoc will join the Pacific Fleet for duty with Amphibious Force, Pacific Fleet, out of Long Beach, Calif. The second of a new class of landing ship tank, she will have greater speed than ships of the earlier classes. Her Increased combat vehicular lift and landing capability will bolster the strength of amphibious forces in the Pacific and will strengthen the resolve of the forces of freedom in the continuing struggle to detect and repel godless communism in Southeast Asia or elsewhere in the Par East, which currently faces the menace of Chinese communism. - TWILL MERROWED BORDER WITH CLOTH BACKING
View AllClose

Sale Price: $12.60
Normally
US NAVY SHIPS THE USS SUMNER COUNTY LST-1148 PATCH - LST-1148 earned one battle star for the Korean War, and one award of the Meritorious Unit Commendation and 10 battle stars for the Vietnam War. -...
864