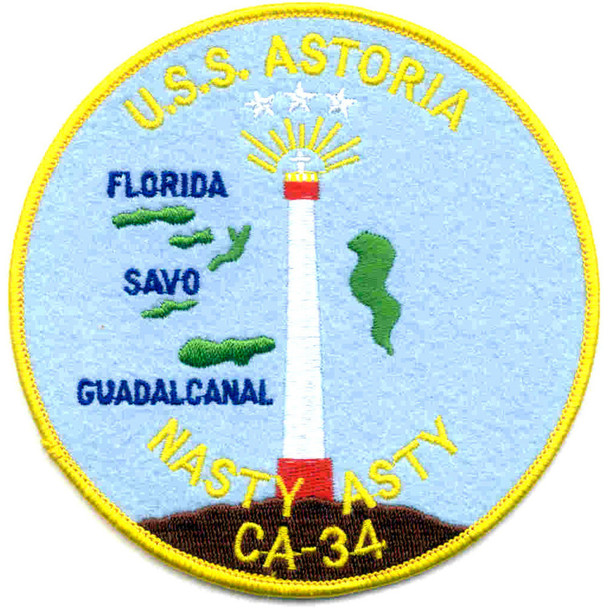 Sale Price: $13.15
Normally
— You save
Frequently bought together:

SHIPS THE USS WISCONSIN CA-34 USS Astoria, a 9950-ton New Orleans class heavy cruiser built at the Puget Sound Yard, was commissioned in April 1934. She spent the summer of 1934 on a shakedown cruise that took her across the Pacific to Australia, then joined the Scouting Force for operations with the U.S. Fleet. For the most of the rest of the decade Astoria took part in the fleet's regular program of exercises in the eastern Pacific region and the Caribbean. Following the conclusion of Fleet Problem XX in early 1939, Astoria was assigned to carry the remains of the late Japanese Ambassador Saito back to his homeland. Upon this diplomatic mission's conclusion in late April, the cruiser visited China, the Philippines and Guam before returning to her normal duties with the U.S. Fleet. As tensions with Japan became increasingly severe in the autumn of 1941, Astoria escorted a troop transport to Manila. When the Japanese attacked Pearl Harbor on 7 December 1941, she was at sea with a task force taking aircraft to Midway. Later in the month, she participated in the abortive Wake Island relief expedition. During the first half of 1942, Astoria operated with, or in support of, aircraft carrier task forces, primarily that built around USS Yorktown (CV-5). From February until May, she was in the south Pacific, protecting that vital region against the ongoing Japanese offensive. She screened the U.S. carriers during the Battle of the Coral Sea in early May, then steamed back to Pearl Harbor in time to take part in the Battle of Midway a month later. After Yorktown was disabled by Japanese air attack on 4 June, Astoria served as Rear Admiral Frank Jack Fletcher's flagship. With the victorious outcome of the Midway battle, U.S. forces were able to begin offensive operations. New Japanese air bases in the southern Solomon Islands were the first objective. After several weeks of repairs and training near Pearl Harbor, Astoria went back to the south Pacific to join the invasion forces. During the 7-8 August 1942 landings on Guadalcanal and Tulagi, she provided gunfire support for Marines ashore and screened the amphibious task force against counter-attacks by Japanese aircraft. On the night of 8-9 August, Astoria was one of three heavy cruisers guarding the northern approach to the invasion area, and was the only one afloat after a blistering night action against a Japanese cruiser force. However, she was gravely damaged in this Battle of Savo Island. Though her crew struggled all through the morning of 9 August to save their ship, USS Astoria succumbed to her wounds shortly after noon, sinking into the depths of a body of water that would soon be called "Iron Bottom Sound", in recognition of all the ships that were lost there.
View AllClose