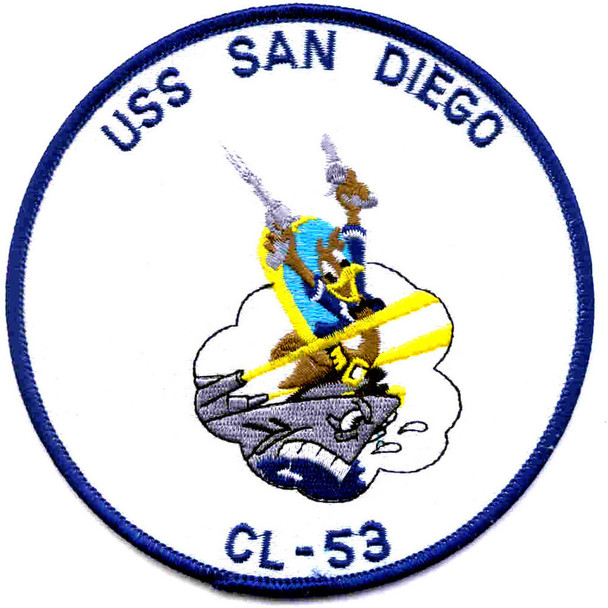 Sale Price: $11.60
Normally
— You save
Frequently bought together:

US NAVY SHIPS THE USS SAN DIEGO CL-53 PATCH USS San Diego, a 6000-ton Atlanta class light cruiser, was built at Quincy, Massachusetts. Commissioned in January 1942, she passed through the Panama Canal en route to the Pacific in May and operated in the Hawaiian area with the carrier Hornet during June and July. In early August, San Diego's task force steamed to the south Pacific. Over the next six months, the cruiser provided anti-aircraft protection for U.S. aircraft carriers during the protracted and difficult campaign to hold Guadalcanal. She was present when USS Wasp was sunk by a Japanese submarine on 15 September and screened Hornet during the Battle of the Santa Cruz Islands on 26 October. In the complex three-day Naval Battle of Guadalcanal in mid-November 1942, San Diego operated with the carrier Enterprise. San Diego continued in her aircraft carrier escort role as the war moved up the Solomon Islands chain in 1943. In November of that year, she covered USS Saratoga and USS Princeton as their planes hit the Japanese base at Rabaul, New Britain. She also accompanied Pacific Fleet carriers as they raided the Marshall Islands in early December. During January-March 1944, San Diego participated in operations to seize bases in the Marshalls and reduce enemy facilities on Truk. Her combat role was briefly interrupted by west coast shipyard work, but she was back in the war zone in time to join in the assault on the Mariana Islands in June and July. During the Battle of the Philippine Sea in mid-June, she was part of a task force built around the carriers Essex, Langley and Cowpens. For the rest of the year San Diego accompanied the carriers as the war pushed into the western Pacific, leading to the capture of some of the Palau Islands in September and a beachhead on Leyte in October. In 1945 San Diego took part in raids against targets around the South China Sea, in the Philippines and in the Japanese home islands. She also supported the invasions of Luzon in January 1945, Iwo Jima in February and the Ryukyus beginning in late March. Her five-inch guns bombarded the enemy ashore during the latter campaign. In late August 1945, after Japan's capitulation, San Diego steamed into Tokyo Bay as flagship of a task force that liberated Allied Prisoners of War. She returned to the United States in mid-September and afterwards helped to transport service personnel home in Operation 'Magic Carpet'. Decommissioned in November 1946, San Juan had no further active service. She was redesignated CLAA-53 in March 1949, stricken from the Navy list ten years later and sold for scrapping in February 1960. - FULLY EMBROIDERED MERROWED BORDER WITH CLOTH BACKING
View AllClose

Sale Price: $9.15
Normally
US NAVY SHIPS THE USS BROOKLYN CL-40 PATCH The Brooklyn class light cruisers were the US Navy's first attempt at a 'light cruiser' built under the terms of the London Treaty of 1930. This treaty...
616

Sale Price: $11.70
Normally
A United States Navy Atlanta-class light cruiser the first USS Juneau (CL-52) was sunk at the Naval Battle of Guadalcanal on November 13th 1942. The five Sullivan brothers along with 682 men were...
12693

Sale Price: $13.65
Normally
United States Navy Crest Military Patch - This is the official crest and the official seal of the US Navy. - White and blue background with yellow rope detailing near the edge and a brown eagle with...
235