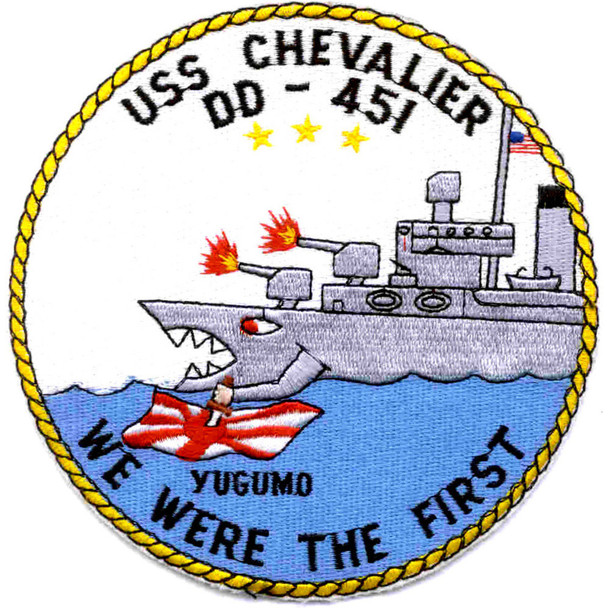 Sale Price: $12.60
Normally
— You save
Frequently bought together:

SHIPS THE USS CHEVALIER DD-451 The first Chevalier (DD-451) was laid down 30 April 1941, launched 11 April 1942 by Bath Iron Works Corp., Bath, Maine; sponsored by Mrs. G. DeC. Chevalier, commissioned 20 July 1942 Lieutenant Commander E. R. McLean, Jr., in command, and reported to the Pacific Fleet. Between 3 October and 11 December 1942 Chevalier made three convoy escort voyages; one coastwise, with tankers; a second, from Bermuda to Norfolk and with one of the first reinforcement convoys for North Africa. Sailing from Norfolk 17 December, Chevalier reached Efate, New Hebrides 22 January 1943. On 27 January she sortied with TF 18 to cover the movement of troop transports to Guadalcanal. On 29 and 30 January Chevalier joined in protective antiaircraft fire as her force came under intensive Japanese air attack in the Battle of Rennell Island. Chevalier operated on patrol from Efate, and after 14 February from Espiritu Santo. On 7 May she escorted three minelayers as they mined Blackett Strait, and Kula Gulf, Solomon Islands. The next night three Japanese destroyers, Kuroshio, Oyashio, and Kagero, ran into the minefield and were severely damaged by the mines and then sunk by aircraft. Between 11 May and 14 May, Chevalier joined in the bombardment of Vila, and covered another minelaying operation in Kula Gulf. On 28 June 1943 the destroyer again sailed from Espiritu Santo as a part of the covering force for troops bound for landings at Rice anchorage to block Japanese movements from Vila to Munda Solomon Islands The group entered Kula Gulf shortly before midnight,1 July, and began to bombard Vila and Bairoko Harbor, while the transports headed for the anchorage. During the operation the American force was attacked by three Japanese destroyers which launched torpedoes, and retired at high-speed. One of the Japanese torpedoes hit Strong (DD-467), tearing open her hull amidships on both sides. Chevalier deliberately rammed her bow into Strong's port side and lay along side for several minutes while Strong's survivors crawled on board. Japanese shore batteries opened fire on the stricken ship, but Chevalier remained alongside until 241 survivors had come on board, while O'Bannon (DD-450) delivered counterfire against the Japanese. Chevalier pulled clear of Strong at 0122, and the stricken destroyer sank A minute later. Chevalier had torn a hole 10 by 2 feet in her bow, but it did not seriously impair her operating ability as it was well above her waterline. The destroyer returned to Espiritu Santo 8 July for repairs. Repairs completed 22 July 1943, Chevalier operated throughout the Solomons on patrol and escort duty until 14 August. On 15 August the destroyer covered the landings at Vella Lavella, Solomon Islands. On the 17th Chevalier and three other destroyers were dispatched to intercept four Japanese destroyers and several enemy barges who were attempting to reinforce Kolombangara. After a brief encounter between the destroyers, in which neither side suffered to any great extent, the Japanese destroyers departed the area, abandoning the barges. The American forces turned their attention to this objective and sank or severely damaged all of them. The destroyer returned to Espiritu Santo 29 August and during September made an escort voyage to Sydney, Australia. On 6 October 1943 Chevalier, O'Bannon, and Selfridge (DD-357) intercepted nine Japanese destroyers and destroyer transports attempting to evacuate troops from Vella Lavella, Solomon Islands. Although greatly outnumbered, the American destroyers attacked. After firing half of their torpedoes and scoring several hits with gunfire, the group continued to steam into the line of fire of enemy torpedoes in order to keep their own guns bearing. At approximately 2205 Chevalier was struck on the port bow by an enemy torpedo which tore her bow off to the bridge, throwing the ship entirely out of control. The destroyer O'Bannon which was following Chevalier could not avoid the damaged destroyer and rammed her in the after engine room, flooding that space and stopping Chevalier's port shaft. While making preparations to abandon ship, Chevalier's skipper ordered the torpedoes in her tubes to be fired at the Japanese destroyer Yugumo. The burning Japanese ship blew up soon after. By 2326 it was apparent that Chevalier could not be saved and "Abandon Ship!" was ordered. Her crew was picked up by O'Bannon's boats, and Chevalier was sunk the following day by a torpedo from a friendly destroyer. Her severed bow was located about a mile to the west and was sunk with depth charges. Chevalier lost 54 killed, and suffered 36 wounded. Chevalier received three battle stars for World War II service.
View AllClose

Sale Price: $12.25
Normally
DD-674 USS Hunt Fletcher class destroyer saw action in the battle for Peleliu Island and was in involved in the first strikes on Pelelui and also saw action in the Battle of The Philippine Seas.
8219