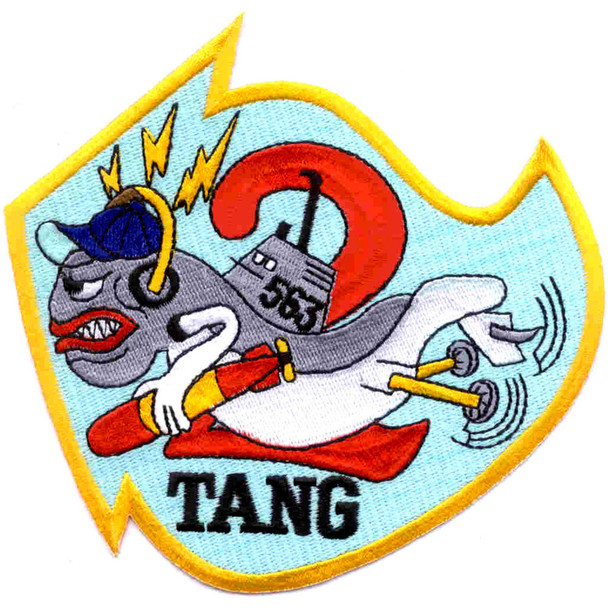 Sale Price: $12.30
Normally
— You save
Frequently bought together:

US NAVY SS-563 USS TANG PATCH "A VERSION" - The Tang was the first submarine designed for underwater performance rather than surfaced speed and handling. Key features included removing the deck guns, streamlining the outer hull, replacing the conning tower with a sail, installing new propellers designed for submerged operations, installing more air conditioning and a snorkel mast, and doubling the battery capacity. The German Type XXI diesel submarine revolutionized submarine design with its introduction in 1945. Fortunately, the war was nearing its end and very few of these boats were able to operate against the Allies in the waning months for the war. Following the war, the US analyzed the captured U-2513 and U-3008 while the Soviet Union took fifteen of these submarines for research. While American fleet submarines could range 30 miles submerged at 3 knots, the German Type XXI submarines could maintain 6 knots for 40 hours, ranging 240 miles and it could do so more quietly than the American submarines and could operate at 650 feet. Equipped with a snorkel, they could range 10,000 miles at 12 knots. - FULLY EMBROIDERED FLAT EDGE WITH PLASTIC BACKING FOR IRON ON CONVENIENCE
View AllClose

Sale Price: $11.55
Normally
SS-306 USS Tang Submarine Military Patch - Tang sank 33 ships in her short career, and was sunk during her final engagement by a circular run of her final launched torpedo. - Blue background with a...
297