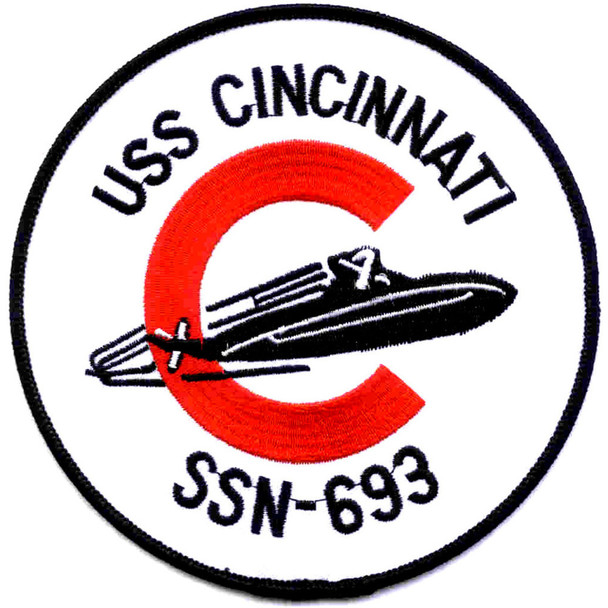 Sale Price: $12.10
Normally
— You save
Frequently bought together:

SUBMARINE SSN-693 USS CINCINNATI USS Cincinnati was laid down by Newport News Shipbuilding & Drydock Co., Newport News, VA 6 April 1974; launched 19 February 1977; sponsored by Mrs. William Keating; and commissioned 10 June 1978 with Cdr Gilbert V. Wilkes, III in command. After commissioning, she traveled to New London, CT for crew training. During the summer of 1978 Cincinnati conducted sound trials, midshipman operations, and torpedo firing exercises. In the fall of 1978 the ship participated in the NATO exercise "Northern Wedding". In January 1979 the ship returned to Newport News Shipbuilding and Drydock Company for a five month post shakedown availability. At the completion of her availability, Cincinnati participated in the training of Prospective Commanding Officers, further sound trials and torpedo firing exercises. In the fall of 1979, Cincinnati began preparations for her first deployment to the Mediterranean." In November 1979, prior to a Mediterranean cruise, she was visited by former President Richard M. Nixon and Admiral Hyman Rickover for an overnight "familiarization and orientation cruise." Returning for the Med in August of 1980, Cincinnati was successful in rescuing a Finnish sailor 70 miles off the east coast of Florida who had been in the water for 22 hours after falling overboard from the Finnish freighter Finnbeaver. Cincinnati made an Indian Ocean deployment 1980-1981. She was decommissioned and struck from the List 29 July 1995 and is scheduled for disposal at Puget Sound Naval Shipyard.
View AllClose

Sale Price: $12.90
Normally
SUBMARINE SSN-703 USS BOSTON USS Boston (SSN-703), a Los Angeles-class submarine, was the seventh ship of the United States to be named for Boston, Massachusetts. The seventh USS Boston was a...
3444

Sale Price: $10.60
Normally
USS CINCINNATI VETERN'S SUBMARINE BASE USSVI Patch - CREED: To perpetuate the memory of our shipmates who gave their lives in the pursuit of their duties while serving their country. That their...
3493