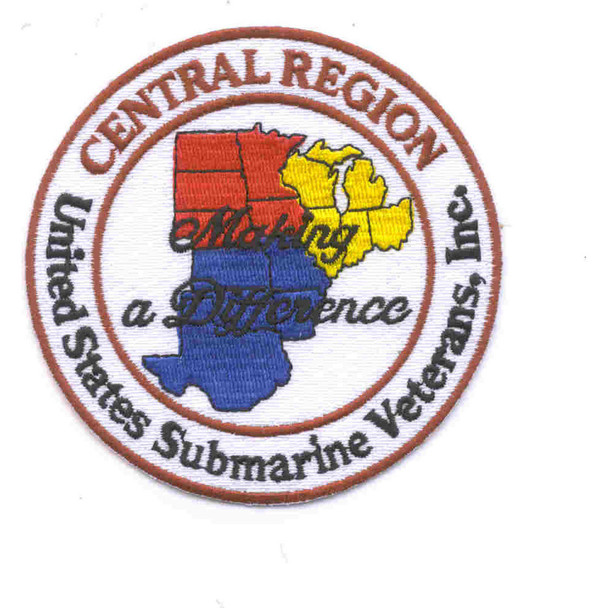 Sale Price: $11.05
Normally
— You save
Frequently bought together:

MC GROGAN?S US NAVY SUBMARINE VETERANS CENTRAL REGION PATCH The Central Region is one of the three Regions of the United states Submarine Veterans, Inc., the others being Western and Eastern. In terms of the number of Bases, the Central Region is the second largest with 37 Bases to the Eastern Region?s 50/ It is also one of two Regions that has at least one Base in all of its 15 States. The Central Region is also the second largest in the number of members at 2,034, or 18% of USSVI?s total membership. Each Region is comprised of 15 States and the Central Region?s reach from the Canada to Mexico , comprised of the States of Arkansas, Illinois, Indiana, Iowa, Kansas, Michigan, Minnesota, Missouri, Nebraska, North Dakota, Ohio, Oklahoma, South Dakota, Texas and Wisconsin The Regions are divided into ten Districts, each District comprises five States, except District 2 and 4 which have six each and District 10 with three. The three Central Regions Districts are District 5 with the States of Texas, Oklahoma, Arkansas, Missouri and Kansas. District 6 is comprised of the States of Illinois, Indiana, Michigan, Ohio and Wisconsin and District 7 comprises the states of Minnesota, North Dakota, South Dakota, Nebraska and Iowa. District 5 is the second largest District in the Nation with 17 Bases (as of 1/1/05), behind District 4 with 19. The Central Region is also home to six of the 19 Submarine Museums Nationally, with the USS Batfish (SS 310) in Muskogee, Oklahoma (Batfish Base), USS Cavalla (SS-244) in Galveston (USS Cavalla Base), Texas, USS Cobia SS245) in Manitowoc, Wisconsin, USS Cod (SS 224) in Cleveland (Cod Base), Ohio, the USS Silversides (SS 236) in Muskegon, Michigan (Escolar Base) and the USS Razorback (SS 394) in North Little Rock, Arkansas (Razozrback Base).. The Central Region has hosted three National in recent years, Manitowoc, Wisconsin in 1995 Peoria (Peoria Base) in 2001, and Duluth in 2002 (Western Lake Superior Base) . It will host the 2005 National Convention in Kansas City (Topeka-Jefferson City Base), the 2006 in Little Rock Arkansas (Razorback Base) and the 2008 Convention will be in Dallas, Texas (Dallas Base),
View AllClose

Sale Price: $9.60
Normally
US NAVY SUBMARINE VETERANS PATCH OUR CREED:"To perpetuate the memory of our shipmates who have given their lives in the pursuit of their duties while serving their country. That their dedication,...
185