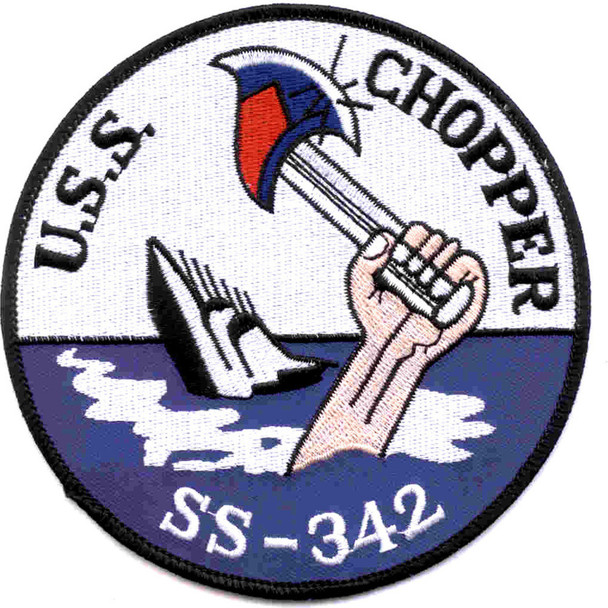 US NAVY SS-342 USS CHOPPER PATCH "D VERSION" USS Chopper (SS-342) Date of Accident: 11 February, 1969 Returned to Service: No While participating in an ASW exercise off the coast of Cuba (in waters with an average depth of over 10,000 feet) with USS Hawkins (DD-873), the AC generators aboard Chopper tripped and went off-line. Chopper was at a depth of 150 feet with a slight down angle (2 to 3 degrees) when the generators tripped. Her speed was between 7 and 9 knots. Within seconds of the power failure, Chopper's down angle increased to 15 degrees down, then 45 degrees down. All the loose items in the submarine began to fall toward the bow. Because of the power loss, the Officer of the Deck was unable to communicate with the engine room. However, the senior controlman in the engine room independently ordered both engines "Back Full" as the Chopper passed 45 degrees down (at about 440 feet). Despite this, and despite blowing ballast and other efforts to regain control of the submarine, the down angle continued to increase, and within 60 seonds of the power failure, Chopper was nearly vertical in the water, with her bow pointing down towards the ocean floor. Chopper reached an estimated depth of 1,011 feet in her bow section (720 in the stern). However, at this point, the crews efforts began to have an effect. Chopper's downward motion ceased, and she even began to gain sternway (movement in reverse). Chopper's bow began to rise and quickly reached a zero angle. However, Chopper's problems were not over. The bow continued to rise, and Chopper began to ascend from the depths. The up angle continued to increase until Chopper was again nearly vertical in the water, with her bow pointed toward the surface. All the loose material that had fallen against the forward bulkheads now literally fell through the air and landed against the after bulkheads. Approximately 120 seconds after loosing AC power, Chopper broke through the surface of the ocean (in a nearly vertical attitude). The entire forward section of the submarine, back to the after sail area, cleared the surface before Chopper again submerged, reaching a depth of approximately 205 feet before again surfacing with an approximate 40 degree up angle. Amazingly, Chopper was able to return to port under her own power. However, a detailed examination discovered that Chopper's hull had suffered extensive structural damage during the deep dive and rapid ascent. Chopper was decommissioned on 15 September, 1969. No men lost. Return to The Early Cold War Return to Peacetime Submarine Accidents Aftermath Chopper was re-classified as AGSS-342, and served as a USNR dockside trainer in New Orleans, LA until 1971, when the USNR Submarine Reserve program was discontinued. She was re-classified as IXSS-342 and was used for salvage and rescue training. In 1976, Chopper was modified to serve as a tethered, submerged torpedo target for USS Spadefish (SSN-668). On 21 July, 1976, while Spadefish was on her final approach, Chopper began to take on water. Chopper filled with water, broke her tethers and slid to the bottom of the Atlantic, 2,400 fathoms below. Note:The author would like to gratefully acknowledge the contributions of Patrick Householder (ex-Chopper), who first made me aware of this incident, Bob Stamper (also a Chopper alum) who was instrumental in getting the Board of Inquiry Report declassified, and finally, Jim O'Brien, webmaster of the USS Chopper website. Without their efforts and continuing hard work, Chopper's story might have been lost to history. - TWILL MERROWED BORDER WITH PLASTIC BACKING FOR IRON ON CONVENIENCE
View AllClose

Sale Price: $13.65
Normally
United States Navy Crest Military Patch - This is the official crest and the official seal of the US Navy. - White and blue background with yellow rope detailing near the edge and a brown eagle with...
235